March 8th - Pink Moon, Queen Street, Exeter, 10am - I've been invited to speak at an event celebrating International Women's Day. I'll be talking about The Witches on your Doorstep, sharing some of Devon's unknown witch cases. Click for the ticket link.

April 17th and 18th - Alexandra Palace, London - I've been invited to give two talks as part of Family History Live! on 17th, I'm discussing Plants, Poultices and Persecution at 1.30pm and on 18th, I'll be talking about The Witches on Your Doorstep at 11.30am. In between times, I'll also be in character as Mistress Margery, demonstrating the wonderful craft of spinning.

April 25th - The Guildhall, Launceston, 7pm - I've been invited by Lawrence House Museum to give my talk Plants, Poultices and Persecution. I'll add the ticket link as soon as it becomes available.
​
June 6th - Crediton Literary Festival, Crediton Library - along with my Exeter Authors Association colleagues, I'll be at the 2020 Crediton Literary Festival - we'll be releasing the full programme shortly, so watch this space!

​June 20th - Vixen Tor Folklore Festival, Exeter Phoenix, 10am til late - I'm speaking about the Dartmoor legend of Vixiana and the demonisation of the witch figure at this brand new folklore festival from Ashley and Sue Thorpe, creators of last November's fantastic Hell Tor Film Festival. This is a day of talks, craft workshops, music, film and theatre, all celebrating the Fierce Women of Folklore. Full programme to be announced shortly, but this will also be an opportunity to see my show WITCH, as we're performing in the evening.

I'm delighted to have been asked by Ashley and Sue Thorpe of Carrion Films to help organise a brand new folklore festival in Devon. We've been working away behind the scenes to put together a fantastic line-up.

VIXEN TOR, the sister festival to Ashley's successful Hell Tor Film Festival which was at the Exeter Phoenix in November 2019, will be at the Phoenix on 20th June 2020. It's celebrating the Fierce Women of Folklore, so there will be nods to the great folklorists of the mid-20th century, such as Theo Brown, who was one of Devon's most prolific collectors of folklore. There will be a crafting workshop by doula Jemma Nicholls of Avalowa Birth, an "in conversation with" pagan rock band Inkubus Sukkubus, who are also doing an acoustic set, talks, films - including a film created especially for the festival by renowned archivist Doc Rowe. There will also be a performance of WITCH in the evening.

I'll share more information soon, but in the meantime, pop the date in your diaries and admire Ashley's fantastic poster! 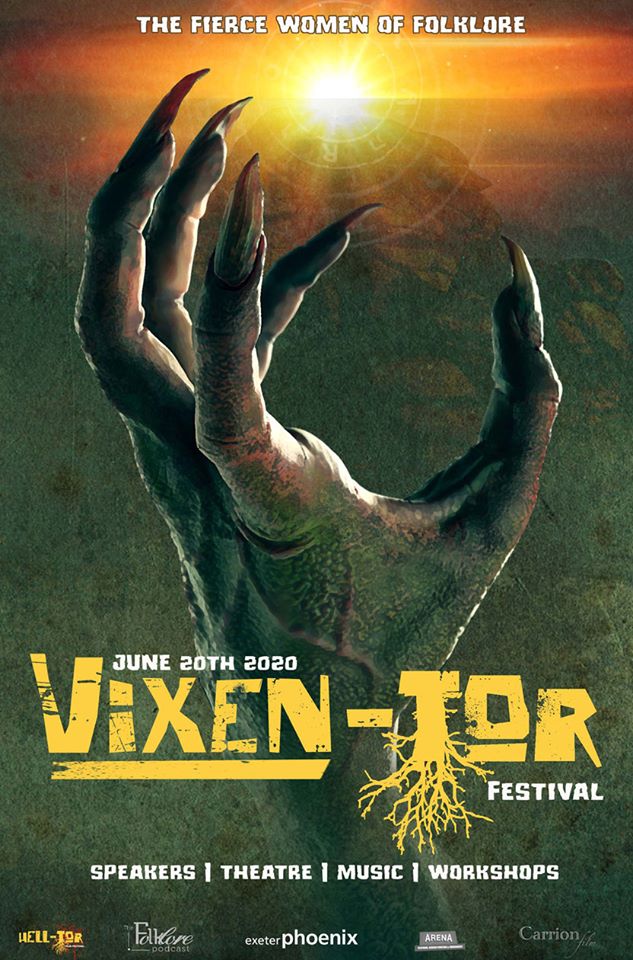 19th - 6-8pm - We are performing in Todmorden, West Yorkshire, as part of the Centre for Folklore, Myth and Magic's first Symposium "Witch: History/Legacy". This is a fantastic event featuring some excellent speakers (see poster below). Tickets for the entire day are £35 and include lunch and refreshments - get yours here

30th - 7.30pm - OUR LONDON PREMIERE AND 75th PERFORMANCE! We are so excited! We will be performing in the stunning Great Barn at Manor Farm in Ruislip as part of the Hillingdon Libraries' Culture Bite Festival. There is a special festival price for this performance - tickets are £7.50 and you can book here

One of the things which still never fails to amaze me is the continued popularity of the show. I am blown away repeatedly by the incredible comments we receive from our audiences. I am curious to see where the next few performances will take us - apart from all over the country! 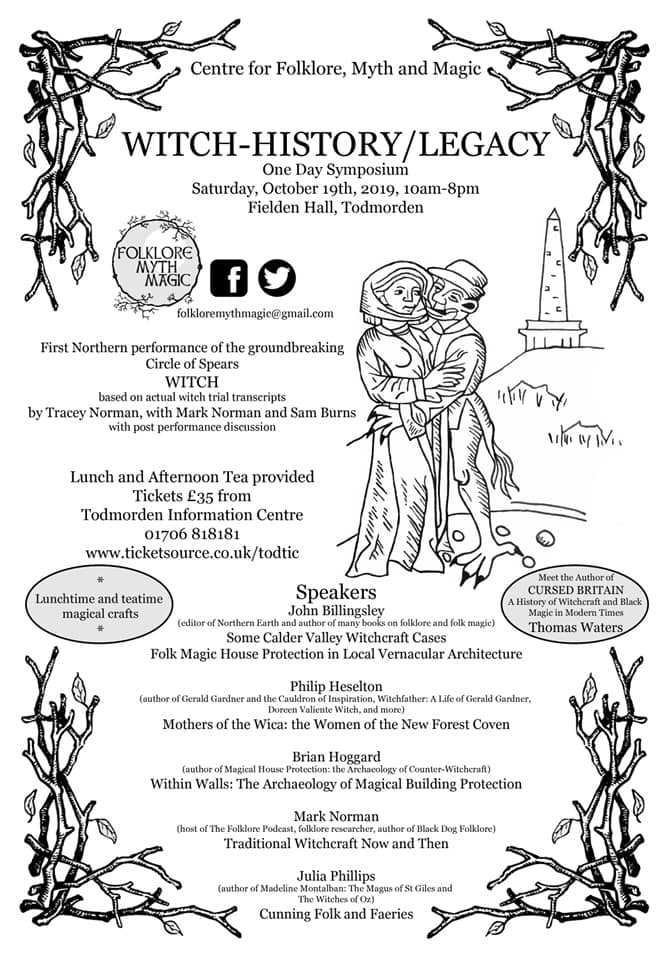 WITCh returns to boscastle for its 4th summer season!

I'm delighted to announce that we are back at our spiritual home in the library at the Museum of Witchcraft and Magic in Boscastle, for our 4th summer season. I'm very grateful to Museum Director Simon Costin for having us back in 2019. The Museum is trying to raise enough money to buy the building it occupies and Circle of Spears Productions will be making a donation from our show profits at the end of the season to help the Museum in their endeavour.

The first performance date is live on the Circle of Spears webstore and you can get your tickets for it here.

All the performances take place in the Museum library and start at 2pm, with doors opening at approximately 1.45pm. As of today (April 22nd), tickets are available for the 5th May show. The rest will be made available shortly, so keep checking if you're interested in booking for one of the later dates.

another date for your diary - march 2019

I'm delighted to have been invited to do a phone interview with the lovely Michael Chequer from BBC Radio Devon. I'll be chatting to him after 9pm on Wednesday 27th March, talking all things WITCH. I had the pleasure of meeting him back in December when he invited my Circle of Spears colleagues Mark and Sam and myself to go to the Plymouth studio to chat about producing audiobooks. It was a great interview, so I'm really looking forward to talking about WITCH.

I also had confirmation of another media interview today, but as that one is taking place after the Torquay and Bovey Tracey shows, I will wait to share the details - but it's a very exciting one for me and I can't wait to tell you all about it!

witch dates in march and april 2019

Here is an update of my WITCH activities over the next few months:

Dates for your diary:

19th March - Radio interview with The Devon Guild of Craftsmen about our performance on 2nd May in Bovey Tracey and Anne Jackson's stunning tapestry exhibition 'Certayne Witches', which is a must-see. I'm also going to be at Torquay Museum briefly that morning to publicise our performances there.

1st April - I will be on The Voice radio at 7pm, talking to Olli Tooley and Simon Dawson about all things book-related and, naturally, WITCH will be mentioned! If you're not in the North Devon area, you can listen in online.

6th April - performances at Torquay Museum 2pm and 7pm - tickets are £10 and can be bought in person at the museum or online from the Circle of Spears webstore.

2nd May - performance at The Devon Guild of Craftsmen in Bovey Tracey 7pm. Check their website (link above) for ticket info.

17th-19th May - I am appearing at this year's Roots Gathering in Kent, mainly promoting my fantasy writing, but I will also have copies of the audio version of WITCH for sale and, as ever, copies of the witness evidence will be available for anyone who is interested.

12th June - I am giving a talk "Plants, Poultices and Persecution" to the Bovey Activities Club - this is a private booking.

As we are just starting the promotion and marketing for the Torquay performances, there may be other media appearances to add to the list over the next few weeks, so watch this space!

I'm really excited to announce that WITCH is coming to South Devon for the first time!

Torquay Museum - Saturday 6th April 2019 at 2pm and 7pm. Torquay Museum is a fabulous museum and we are delighted to be able to support them and help raise funds.

The Devon Guild of Craftsmen, Bovey Tracey - Thursday 2nd May 2019 at 7.30pm. We are supporting tapestry artist Anne Jackson's superb exhibition Certayne Wytches for the second time, having previously had this privilege back in 2017 when she exhibited at Stroud's Museum in the Park.

DATES for your diary - witch out and about!

The Exeter Authors Association, of which I'm a member, is putting on a comprehensive series of free events at libraries in Devon during 2018. The group covers the vast majority of genres, so there is a huge range of books on offer to suit pretty much every taste. There will be the chance to meet and chat with the authors, listen to talks about their work, take part in workshops and buy books (which can be personalised - just ask!)

If you would like me to speak at your venue, please get in touch via the contact form.

I'm honoured to have been asked to speak at the next TWO Women's Circle meetings at the wonderful independent bookshop Liznojan in Gold Street, Tiverton. I will be sharing Deanes's story (briefly) before focussing on the historical documents in her case and then moving on to the Fortescue family recipes and their rather unusual ingredients.

These meetings are incredibly popular and advance booking is essential - ring the shop on 07956 714214 to secure your place. 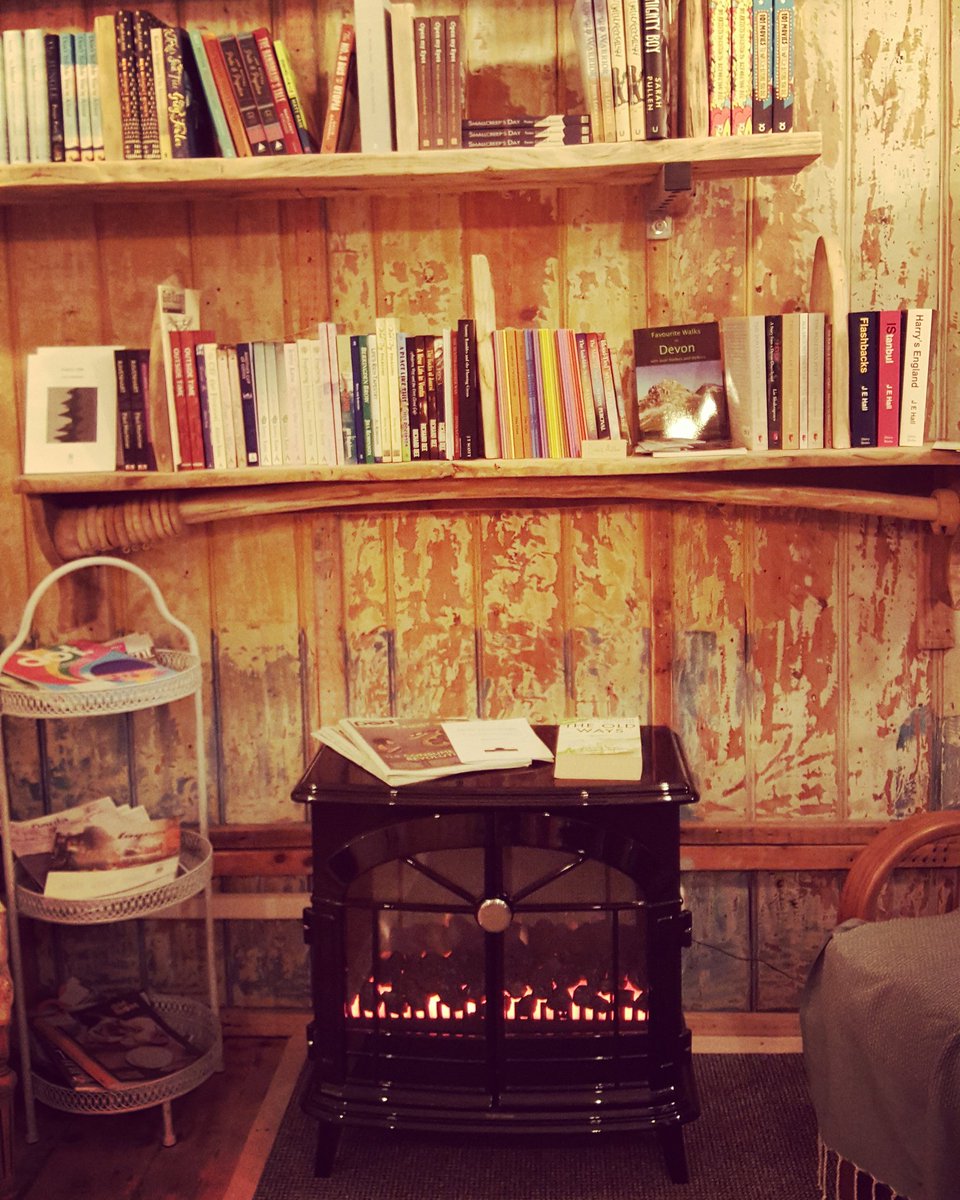 This is not a WITCH event, but I am delighted to have been invited to support fellow fantasy author Susie Williamson at the launch of her debut novel Return of the Mantra. I will be reading a short extract from my Lovecraftian horror Dark Words.
​Check out the poster! 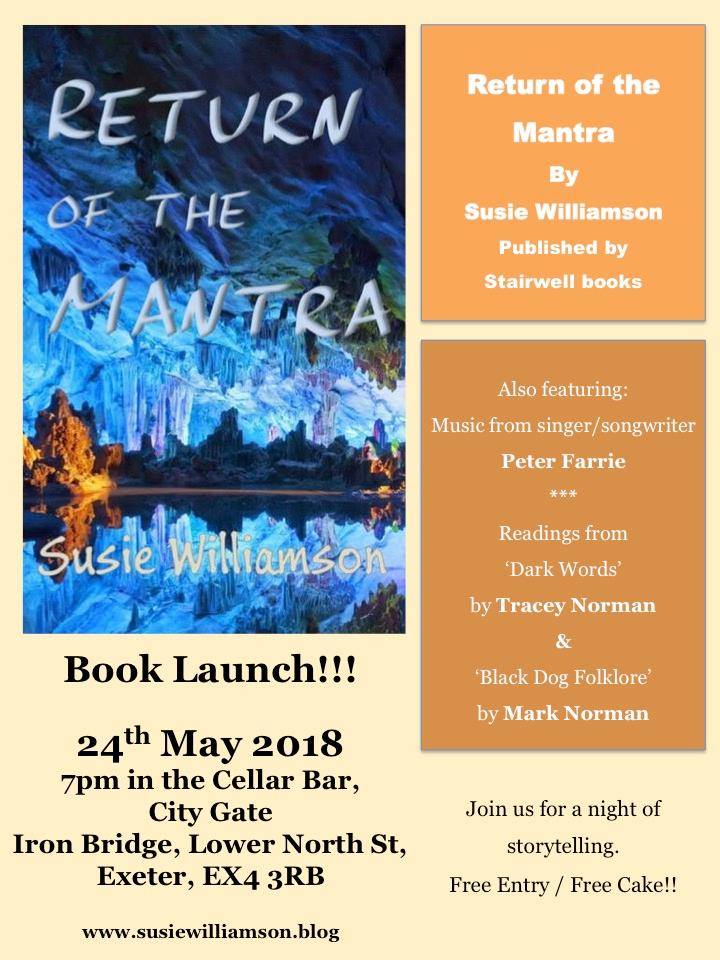 WITCH returns to boscastle for 2018!

I am delighted to announce that WITCH is returning to Boscastle this year! We have been invited by the Museum of Witchcraft and Magic to bring the show back to the library for three performances during the summer. Tickets are £10 and are available now, either from the Museum or via the Circle of Spears website - and don't forget that the audio version is exclusively available from Circle of Spears!

Seating in the Museum library is limited to 20 per performance, so please make sure that you book early in order to avoid disappointment. 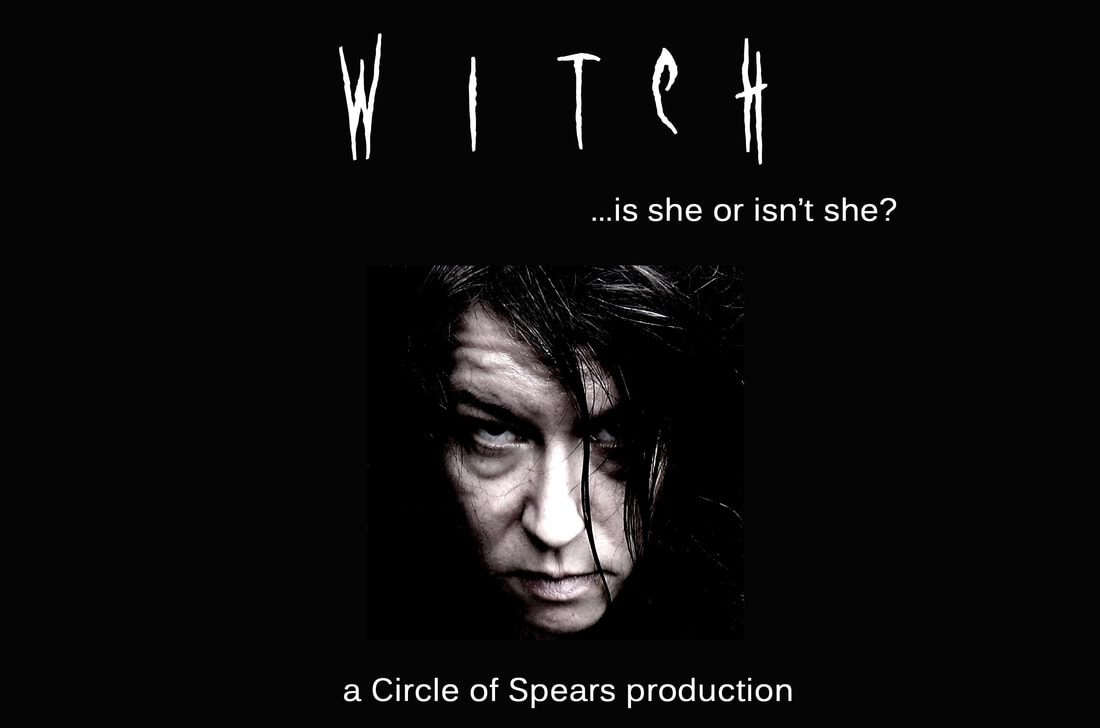 out and about with exeter authors association

WITCH has several outings this year as the basis for a variety of talks I will be giving at events by the Exeter Authors Association. The first is at Exeter Central Library on Saturday 31st March 2018. I will be reading my children's book at 10am and giving a talk on WITCH from 11.30-12.30. The talks, workshops and pop-up bookshop will all be in the Rougemont Room at the library from 10am-4pm and you can drop in and out as much as you like during the course of the day. As soon as the full programme is finalised, I will add the details here, but for now, here is the poster for my WITCH talk.​ 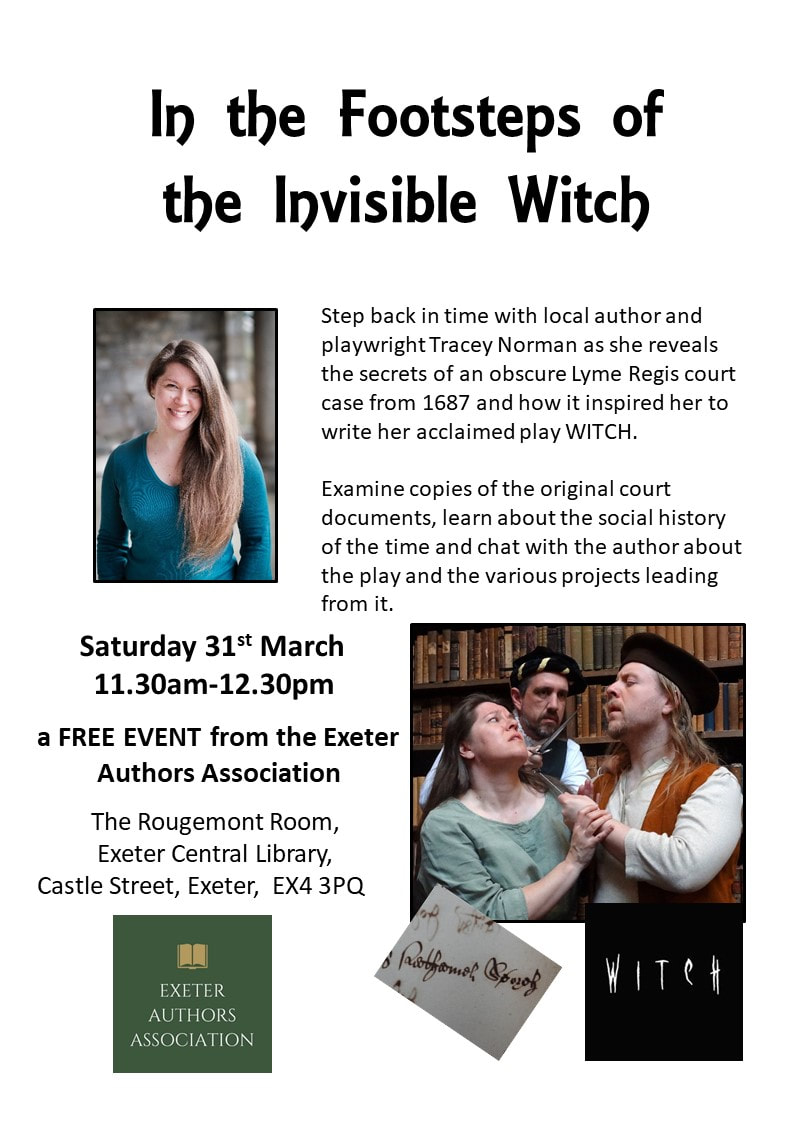 2018 looks like it will be the year for Theatre in Education, as all our bookings so far are from universities, who want us to bring the show to their students to complement the witchcraft module in their degree and demonstrate one of the many ways history can be used creatively.

Would you like Circle of Spears Productions to bring WITCH to a venue near you? Do you have a venue and want something different and unusual?  If so, please get in touch using my contact form. The show is staged very simply with minimal tech requirements and can fit into pretty much any space.
THE 2017 TOUR